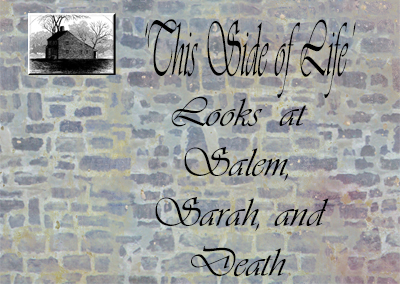 I live in a city riddled with history. That history is dark indeed. In exploring my city’s past, I found what I believed to be a love story gone wrong—or right. Depends on how you look at it.

Sarah Ingersoll (born 6-28-1655) was a girl when she first met Joseph Houlton. He worked on her father’s farm. There is no historical indication of any romance, but you must understand this was a fairly closed society back in the day.

At some point, Sarah was married off to a man by the name of William Hanes—a landowner and brother to then Lt. Governor Haynes. They had two children, and the Haynes mysteriously disappears from history. Sarah, however, does not; nor does her brother, Nathaniel, who was a powerful deacon of the church here in Salem. His signature was preserved for all time below

Nathaniel Ingersol was a powerful Deacon of his church.  He ran a tavern in what is now called Danvers.  Some of the accused were examined in his tavern.  Old Rebecca Nurse was lodged there overnight before her examination–never to return home again.  If Nathaniel was such a good man–why did he allow such brutalities to occur in his establishment?

After the disappearance of Haynes, Sarah, his wife and an Ingersoll, crops up married to John Houlton. They married in Newburyport rather than Salem. Back in the 1600s, Newburyport was quite a trek. Imagine the roads at the time: wide dirt paths paved with pine if they were paved at all. What might take me less than an hour probably took them a day or better. Why didn’t they marry in Salem?

Sarah and Joseph went on with their lives and produced five children. Intrigue regarding Haynes’ death did not come up until a few decades later when Joseph and Sarah tried to give a tract of land to the church. It seems the deed was not legitimately passed on to Sarah from Haynes. Questions as to circumstances around his disappearance must have arisen, but history seems to have hushed this up.

I spent many hours researching at the Peabody Essex Museum.  And walked away with only suspicions.  What can be gleaned from historical innuendo? Perhaps Sarah—a daughter of a powerful Salem family—and Joseph Houlton—Sarah’s true love—disposed of William Haynes in order to marry. They went on with their lives and history applied a balm. What happened to William Haynes?

The dark implications of a “witch hunt” came about during Sarah and Nathaniel Ingersolls’ lifetimes. It wasn’t mold on bread (one supposition), or generalized hysteria; it was a group of people bent on wreaking havoc on a few, and they got away with it. Chock it up to good old human nature. The Putnam family and the Proctor family appeared to be at odds. The Putnams survived.

Thomas Putnam and his daughter Ann were responsible for 106 of the accusations levied. His brother, Joseph, had married into the rival Porter family. Thomas, left out of all inheritances by his father and father-in-law, may have desired to recoup his losses by accusing members of the Porter family.

Twenty people were executed as a result of trials. Over 200 were accused  Many escaped death and torture by confessing. Mothers, children, and the elderly were not spared.  Giles Cory, 81-years-old) was one of the unlucky ones. He was accused of witchcraft after speaking out about accusations made against his wife, Martha.

Confessing brought with it consequences. Cory had deeded his lands to his sons before dying. This meant that his lands could not be redistributed by whoever was in authority. For two days he lie naked under a board being heaped by rocks. He is rumored to have cried out, “more stones,” before dying. Many of these victims levied curses before dying. Bridget Bishops was one, and ironically, her accuser died as she predicted

Think this can’t happen today?  Today we call undesirables Muslims, Jews, non-whites, or anyone not of the Christian faith.