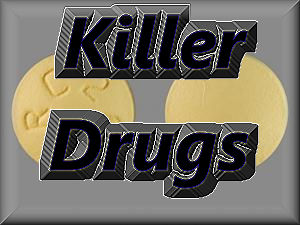 There are plenty of street drugs that can kill, but what about prescription meds? More and more drugs cause medical consequences endured by people who take them. More doctors are prescribing meds for off-label uses, resulting in complications not revealed to the patient.

I give you my travels through the prescription drug realm.

As I have gotten older, my body has become more susceptible to side effects. [Or is it that drugs are more prone to cause them?] I have implored doctors not to give me drugs that impact blood sugar and blood pressure. This has often fallen on deaf ears.

It seems doctors wish to help, but the pen can be mightier than the sword when it comes to that damned prescription pad. I have suffered at the hands of this mindset. Many drugs create problems rather than solve them.

One drug I have been put on was Lamictal.

I started on a low dose. Twenty-five milligrams. I had a doctor’s appointment four days after I started the drug. My blood pressure had jumped 20 points on each end. I googled Lamictal and there it was—high blood pressure. I stopped the drug immediately, and my blood pressure went back to my normal.

There were a few drugs I was put on that boosted my blood pressure. I cannot remember them all.

There have been some drugs that I have tried that boosted my blood sugar. Doctors seem to love these drugs. I keep telling them,

“I have Autoimmune Disease. I don’t need another major disease (Diabetes).” Most doctors agree, but they still pull out that prescription pad.

I had one Physician’s Assistant who lied to me and told me Geodon would not cause blood sugar spikes. I looked it up on Web MD and lo and behold—it causes diabetes. It is a drug that is often used for PTSD, but trading PTSD for Diabetes is not the direction I want to go in. My blood sugar spiked 20 points in just four days. I stopped the drug. The PA told me Web MD was wrong. But the truth lies in the results.

Then I discovered a drug I was already on combined with the above caused pre-renal failure in 100% of 60+-year-old women. That’s me.

The most recent catastrophe was a drug by the name of Aricept.

An appointment at the doctors recommended the pneumonia shot [Prevnar] and a flu shot. I asked if it was safe to get them both at the same time, and the nurse said,

“Su-u-ure—we give them in different arms.”

Well—hey—I gotta tell you: It was a very bad idea. Aluminum in one arm and mercury in the other. I took a cognitive hit I thought I’d never recover from. It was autistic-like. I’d be writing, trying to find a word in my mind, and find that, not only could I not find the word, I could not grab any related concept. There was a black hole in my mind.

Finding words in that black hole?  Let me demonstrate through analogy.

I had stopped writing from 2010, pretty much, thru 2016 because my hands had become so crippled. I had seen a neuro-psychologist who recommended I go back to writing and that I should also take a drug by the name of Aricept.

I periodically experienced what I called word-abysses and could not remember a word. More significantly, I could not verbalize any concept relative to a word, so no replacements were available to my lips [or my fingertips…].

A simple example could be the word: tree [although the usual words were more complex]:

Where that word [and all its relations] resided in my brain turned into a black hole. I could get none of them from my brain to my lips. I had been getting sicker and sicker, so I thought what I was experiencing was part of a dying process. I thought it was the beginning of my loss of language. I thought it was over for me.

I was uneducated as to the state of medical affairs at the time, so I let the doctor convince me it was early dementia. Off went a prescription for Aricept to the pharmacy.

Aricept is an Alzheimer’s drug. Some doctors have told me it’s not much good for Alzheimer’s. It’s being promoted off-label for a myriad of things. God help patients that have this drug thrust upon them.

Aricept was a wild ride. I should have known better when my pharmacy called me and refused to fill it until they spoke with the doctor about interactions with other medications I take. One drug I had to stop was for anxiety. The other, Trazadone, treats my insomnia. Sleep is important to me, so, at first, I did not give up the Trazadone. That was a mistake. I took my Trazadone at night, and my heart practically walloped out of my chest. Yes—Aricept and Trazodone interacted with each other and impact the heart. The interaction can be life-threatening. I doubt my neurologist even checked on what I was taking.

I backed off the Trazadone until my heart stopped screaming. Sleep went with it. But what I didn’t know was that Aricept could cause a pretty damned intense insomnia.

There is a desperation entwined with trying to keep your thought process. I did not look up side effects. I only knew my blood pressure and blood sugar was fine so I was happy. I attributed my insomnia to having to back down on the Trazadone, but there was a tickle in the back of my mind this insomnia was more intense. I attributed it to hypervigilance [which is just the result of being so damned smart.]

Doctors sought to alleviate my insomnia with more drugs. One was Remeron. It is also used to treat Depression [which I didn’t have.] After six weeks on that drug, I woke in the morning to find I could not read anything on my computer. My vision would clear up after a few hours, but for about three hours upon awakening, I was legally blind. I thought something had finally taken my vision initially. After three days, I thought about what had changed in my life recently. On a whim, I googled Remeron and vision and came up with something like this. The piece I found was more specific in that it can cause blindness in my age group. I dumped Remeron and recovered my vision. I brought the article into my doctor, and he said,

Other drugs were added to no avail—with no consideration that my difficulties may have been a consequence of another drug.

By this time, I had dumped my neuro and found a new one. He continued the Aricept. He left that practice, and I was forced to find yet another neurologist. By this time, I was experiencing severe muscle spasms all over my body. I had had spasms for years, but the rising intensity was more than I could bear. I had informed the dwellers of my building that if they heard me screaming they were not to call 911. I was put on Baclofen for spasms. The occasional relief was welcome.

My first visit to my new neurologist brought with it the message that Aricept could be causing my spasms. By this time I was thinking, brain be damned. I cannot take the pain.

Now that I was off the Aricept, I could increase my Trazadone to treat my insomnia. I called the doctor treating this condition, and he ordered increases in small increments to start immediately. When I increased the dose, I noticed my heart racing straight away. The Aricept is not out of my system, I thought. I wandered back to Google and discovered Aricept does not leave the body for 16 days. I wondered why my doctor did not know this. I waited for 16 days.

As I waited for Aricept to wean out of my system, I found myself passing out in the most inopportune places. I was exhausted. It had been a wild ride for eight months. It was over. I feel like a fool for trusting that a doctor would give me helpful medications rather than hurtful ones. It is disturbing that the several doctors I saw for the myriad of difficulties that Aricept introduced did not know that simply removing a drug from my repertoire rather than adding more would be more helpful.

It took over a year to recover from the devastating effects of Aricept on my brain.

Sleep comes easier now. I am relieved. A part of me misses that energy I felt. But I don’t miss all the problems that came with it.

It’s now been about three years since I wrote this article. I’ve learned much. I wish I had learned more sooner. I am stuck with a myriad of medical issues caused by prescription pads and MDs’ orders. I would be healthier had I never gone to a doctor. I do have one honest doctor in my corner, and apologies beam from her eyes when I visit her office. I’m still struggling with a lasting infection given to me by one medication I have not taken for 2 years. We just discovered [together] I can not even take antibiotics. I held on to the hope that antibiotics were sacrosanct—they are not. I found a homeopathic answer on my own.

Health insurance only covers conventional medicine. No sense in paying for something I can’t use. I’ve been conditioned to believe I need these things for a long, long time. But for me, they’re suicide. I’d like to keep breathing.

I can take no—and I mean no—pharmaceutical products.  They cause all sorts of problems: crashing kidneys; liver inflammation; legal blindness; cognitive whacks; 24/7 pain; high blood pressure; high blood sugar; infections; severe cough [AKA lung damage]; autoimmune disease; insomnia; anxiety; etc. Now almost all gone. I still have some liver inflammation problems, and I’ll die with the autoimmune disease, but I can’t go to today’s MDs. I can’t take pharmaceuticals, and that will inevitably be his or her answer.

And MDs do not treat damages from medications. They’ve got a new mantra:

“Just because it’s on the list doesn’t mean it happens.”

So if side-effects do not exist for these people calling themselves MDs, it’s best to avoid them.

Whether we like it or not, we live in a drug culture. Street vendors sell drugs that kill, and so do doctors.

I’ve spoken to a few people with Parkinson’s who have said their medications hurt rather than helped.