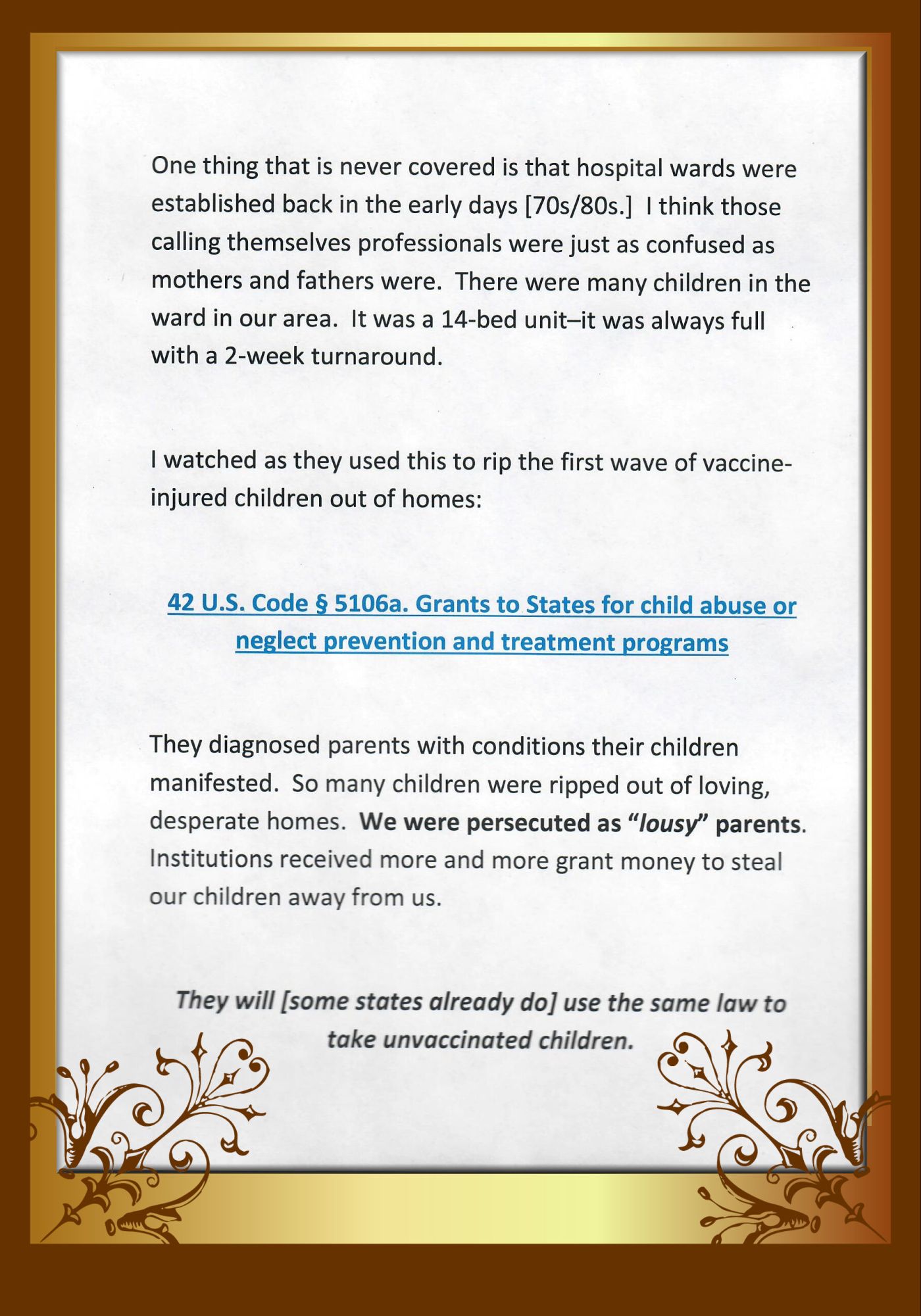 One thing that is never covered is that hospital wards were established back in the early days [70s/80s.]  I think those calling themselves professionals were just as confused as mothers and fathers were.  There were many children in the ward in our area.  It was a 14-bed unit–it was always full with a 2-week turnaround.

I watched as they used this to rip the first wave of vaccine-injured children out of homes:

42 U.S. Code § 5106a. Grants to States for child abuse or neglect prevention and treatment programs.

They diagnosed parents with conditions their children manifested.  So many children were ripped out of loving, desperate homes.  We were persecuted as “lousy” parents.  Institutions received more and more grant money to steal our children away from us.

They will [some states already do] use the same law to take unvaccinated children.

A kind social worker had taken our case and had protected us.  Back in those days, she worked for the [D]ept of [S]ocial [S]ervices–the DSS.  My husband had died and we were on our own.  She was a good friend and mentor, and I knew she knew I was devoted to my boys.

Decades after I succeeded in preventing the State from taking my children, a social worker involved in the takings informed me it was a good thing I had done so.  These medically-harmed children had not fared so well in the over-burdened, State-run Foster Care system.

Yes—I know—people will say this is just a little mother crying about something wrong with her children, but it is more than that.  Here are records from when I was a child:

“Joyce is no school behavior problem but she is underachieving. She is intensely interested in her hobbies. She raises and breeds tropical fish, hamsters, and experimental mice. She has done a great deal of research for her hobby and finds it a tremendous source of satisfaction. She hopes to go into research and her dream is to work at Bar Harbor where they are doing “tremendous things” in genetics.

Testing reveals an I.Q. of 134 on WISC placing her in the superior range of intelligence.”

When I was 23, one of my professors pulled me into his office and joyously told me I was going to medical school—imagine—a free pass to medical school.   The image of my tormented toddler roiled in my mind.  I declined, and his jaw nearly crashed to the floor.  I never told him why.

I knew [or believed] that those calling themselves professionals couldn’t figure out what was wrong with my baby boy—I knew I was his best hope.  It turned out that the things they called vaccines [that my kids were given] were pulled off the US market because they were causing too much damage.  [the DPT and the Oral Polio.]  I think it would have at least been a courtesy to tell the devastated parents.

In 1985 or ’86, the vaccine industry went to Reagan.  They said they weren’t going to make vaccinations anymore because they were getting sued too much.  Now, hey—I would have mandated that they had to make them and they had to make them safe.  Instead, Reagan and Congress completely indemnified the pharmaceutical/vaccine industry from any civil liability.  Yes—that’s right—you get hurt it’s just too damned bad.  But that’s okay—they’re working really hard to make sure you get every damned one of them—birth to death–and that’s around the globe.

Welcome to my world