I am stunned and disheartened by this news. Miss Vaughan was a huge voice for us–the vaccine-injured. I pray she finds peace in what she did for us and watches over all of us.

My heart is very heavy. I never met her, but feel a keen sense of loss for her voice, bravery, and courage. Tears are most definitely flowing.

Brandy Vaughan took Vaccine-Injury Deniers on head first in a fearless fashion.  The vaccine-injured have lost a powerful advocate.  [as we see below]

CORRUPTION IN THE VACCINE INDUSTRY

Editor’s Note: I have known this information for several hours, but did not go public until after I saw Dr. Shannon Kroner write a public announcement about it after she had hung up with Brandy’s only child, her surviving son who is a minor. I wanted to make sure that her tragic death had been announced publicly before I published my article. May she rest in peace. I’ve had the pleasure of meeting Brandy Vaughan several times. She spoke nonstop about her best friend Tina Marie. Tina explains that Brandy said that if anything ever happened to her she would want Tina to help take care of her only child. Her son Bastien. Here is a GoFundMe set up for him started by Tina, and you will notice that Tina clearly lists that Brandy was very clear that if anything happened to her it was most likely foul play a.k.a. homicide. Sadly, the majority of her close friends have told me they believe the same. Here is the GoFundMe link if you would like to donate.

It is with such a heavy heart that I list yet another activist found dead, and this time it is my friend and colleague, Brandy Vaughan, the founder of the well-known non profit Learn The Risk. She was found dead by her son who is a minor.

I have had the pleasure of meeting Brandy many times and I have interviewed her and had the honor to be interviewed by her.

I have felt very concerned about her this year as I have not heard from her as much as usual and had inquired with her very close friends who said she was absolutely fine as you can see below.

Brandy had written me over the years stating that she was fearful for her life and asked me if I was and even said she was afraid of being poisoned. I have all this in writing although usually the authorities don’t come to me when my friends and holistic doctors are found dead on a regular basis.

Alas, I don’t think they’ve ever come to me although I’ve had some good conversations with the authorities contacting them about the continued deaths that don’t seem to stop. I do not know the cause of Brandy’s death, and I am only stating factual information.

The video was our first meeting almost 4 years ago, and we were fortunate enough to meet several times after that and now I regret not taking the time when she wrote me asking if I could meet her for lunch at California Jam. It is a conference where I would speak to thousands and she attended several years with me.

Life is short and this isn’t the only one of the activists or holistic doctors who had wanted to meet up and I admittedly was so busy I didn’t take the time to do so. Don’t make that mistake like me – make time for your loved ones, especially in 2020. You never know when they’re going to go.

When I used to see Brandy I would joke about the old song by Looking Glass called Brandy and we would laugh about it. Today I have put that song on replay for the entire day listening over and over. 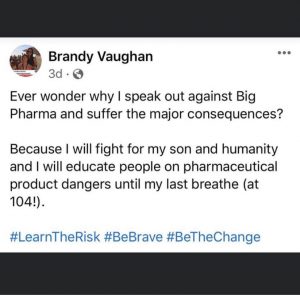 This was posted just three days ago.

My heart goes out to her parents and to her surviving son and to all the people who loved her so much.

It was an honor to know Brandy and I will treasure the many Voice messages, text messages and conversations that we had.

Again, my heart goes out to her family and especially her very close friends and even her ex who is a friend of mine. Dr. Mercola and I both grieved today together at the loss of such a wonderful human being and hero, and voice for the vaccine injured. 🙏 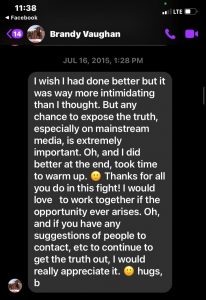 RIP my friend. You will be deeply missed.

We recommend that you watch these video interview, especially the one below.

Please excuse any typos as it’s very difficult for me to write this today. Dr. Mercola and I are sending thoughts and prayers, especially to her son at this time, and we will keep you updated.

Copyright 2013-2020 – permission to reprint our articles fully granted, WITH links to original story, our site, founder and her bio.

Erin Elizabeth is a long time activist with a passion for the healing arts, working in that arena for a quarter century. Her site, not even six years old cracked the top natural health sites within the first year of its inception. She is an author, public speaker, and has recently done some TV and film programs for some of her original work which have attracted international media coverage. Erin was the recipient for the Doctors Who Rock “Truth in Journalism award for 2017. You can get Erin’s free e-book here and also watch a short documentary on how she overcame vaccine injuries, Lyme disease, significant weight gain, and more. Follow Erin on Facebook, Twitter, and Instagram.P.S. You can subscribe to her Youtube Channel for breaking news, television appearances and more.