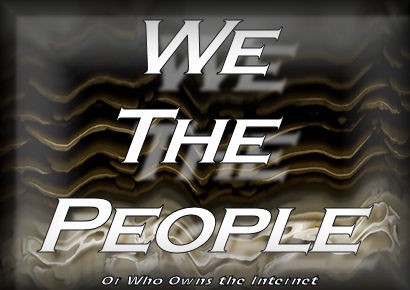 I’ve been noticing strange doings on the Internet.   Data was telling me the Internet was being bought up.  At the time, it was just me saying it—not much to go on.  But now information is coming out that this is precisely what’s happening.

Let’s look at the history of the Internet and start with PSI.

Yes, I know.  Many who need to translate can’t translate a graphic.  In the interest of facilitating translation by the less agile the highlighted section is here:

“Before 1990, the Internet had been largely funded by government agencies including DARPA (the original and still existing at that time, ARPANET), the National Science Foundation (NSF) for the NSFNET, various U.S. federal agency networks such as the Department of Energy and NASA, and with grants to various regional networks including NYSERNet.  Many of the stakeholders of the Internet of the 1980s were military, industrial, or academic researchers who were largely satisfied with the then-current model of usage and governance.  However, appropriate commercial usage policies were debated on such mailing lists as com-priv…”

[I think I’ll forgo these types of graphics here.]

What does this mean?  It means what The Government Giveth, the Government can Taketh away.  Thus the expiration of:

“Network neutrality, most commonly called net neutrality, is the principle that Internet service providers (ISPs) must treat all Internet communications equally, and not discriminate or charge differently based on user, content, website, platform, application, type of equipment, source address, destination address, or method of communication.[4][5]

Let’s look at a Wikipedia explanation of DARPA:

This article is about the U.S. military research agency. For other uses, see DARPA (disambiguation).

“The Defense Advanced Research Projects Agency (DARPA) is a research and development agency of the United States Department of Defense responsible for the development of emerging technologies for use by the military.

Originally known as the Advanced Research Projects Agency (ARPA), the agency was created on February 7, 1958 by President Dwight D. Eisenhower in response to the Soviet launching of Sputnik 1 in 1957. By collaborating with academic, industry, and government partners, DARPA formulates and executes research and development projects to expand the frontiers of technology and Science, often beyond immediate U.S. military requirements.[3]

DARPA-funded projects have provided significant technologies that influenced many non-military fields, such as computer networking and the basis for the modern Internet, and graphical user interfaces in information technology.

The name of the organization first changed from its founding name, ARPA, to DARPA, in March 1972, changing back to ARPA in February 1993, then reverted to DARPA in March 1996.[5]

The agency’s most recent director, appointed in 2020, was Victoria Coleman.[6] Coleman’s last day at the agency was Jan 20, 2021. Deputy director Peter Highnam is filling in as acting director until a full-time director is appointed by the Biden administration.[7]”

Note that the parent company is the Department of Defense.  They are the governmental agency involved in this:

The Human Body, Nanotechnology, and We

Is What Being Attempted on Us Now Inspired by a Comic Book? [And Other Things…]

I have to ask…  Is DARPA in any way involved with this “Science isn’t Science” thing?  I mean, real Science is being attacked as not being Science at all, while ‘Propagandic’ Science is extolled.  [That’s Science that’s not Science—it’s marketing.]

I do agree technology must be explored and/or developed.  I did a stint in Tech myself.  If we are not in the know, others will be—I just wish our Stratum would be left alone.

Not to be confused with the NSF International.

“The National Science Foundation (NSF) is an independent agency of the United States government that supports fundamental research and education in all the non-medical fields of Science and engineering. Its medical counterpart is the National Institutes of Health. With an annual budget of about US$8.3 billion (fiscal year 2020), the NSF funds approximately 25% of all federally supported basic research conducted by the United States’ colleges and universities.[3] In some fields, such as mathematics, computer science, economics, and the social sciences, the NSF is the major source of federal backing.

The NSF’s director and deputy director are appointed by the President of the United States and confirmed by the United States Senate, whereas the 24 president-appointed members of the National Science Board (NSB)[4] do not require Senate confirmation. The director and deputy director are responsible for administration, planning, budgeting and day-to-day operations of the foundation, while the NSB meets six times a year to establish its overall policies. The current NSF director is Sethuraman Panchanathan.

You can see whoever is elected as President can control the whole kitten-kaboodle.  That is something I wasn’t aware of—how about you?

And there has to be a way to layer closed systems in order to make them impervious to cyber-attack.  I’m sure the most sensitive of our sensitive systems do this—just not our damned power grid.

Now we move on to just who is buying up the Internet.  Are they players or pawns?  I now view everything that happens in Washington D.C. as puppetmasters pulling the strings of puppets on a stage.  It would be comedic if it wasn’t so hazardous to the health of the ‘We The People’ stratum.

There was a time the ‘We The People’ Stratum had a say in what goes on here.  Over the decades since World War II, we forgot to fight to keep that privilege, and it has been taken from us.  I have to laugh when Congressional members go looking for a raise.  I think $15.00 should be good enough for them, too.  I also think anything accrued during the course of public service should be rescinded to the Government when a term ends—other than their $15.00 an hour wage, that is.

We’ve seen the CEOs of these companies on the stage of Congress.  What the ‘We The People’ stratum is allowed to see probably is not what goes on behind closed doors.

Amazon Owns Nearly Half Of The Public-Cloud Infrastructure Market Worth Over $32 Billion: Report

Microsoft, Google and IBM Public Cloud Surge is at Expense of Smaller Providers

The Article below must have happened while we were sleeping.

Fascinating Number: Google Is Now 40% Of The Internet

Amir Haleem, Founder and CEO of FirstMark-backed Helium, spoke at Hardwired in September 2018. He walked the audience through the pitfalls of a centralized internet and provided a glimpse into the future towards a world with a decentralized internet enabled via Helium gateways.

Copyright Disclaimer Under Section 107 of the Copyright Act 1976, allowance is made for “fair use” for purposes such as criticism, comment, news reporting, teaching, scholarship, and research. Fair use is a use permitted by copyright statute that might otherwise be infringing. Non-profit, educational or personal use tips the balance in favor of fair use.

The Dangers of a Centralized Internet

“The centralized Internet is another name for an internet owned and controlled by less than 1% of the world. It is an internet without privacy, precariously dependent on centralized service providers whose failure would result in denial of access to all dependent websites, and where the user has only the illusion of choice when it comes to the type of content they are provided.

Consider that Amazon alone controls 40% of the cloud market. And that unelected employees at Twitter and Facebook recently de-platformed a sitting U.S. president.

Information is the currency of democracy, so what happens when a few, unelected individuals and companies control the flow? How can democratic principles possible in such a situation?

Join us on Feb. 5th, 2:00 pm EST for this exciting livestream. We’ll be discussing blockchain, crypto, value/wealth creation and preservation, censorship, community building, activism, and much more! You can bookmark or visit the event here:”

3 thoughts on “The ‘We The People’ Stratum or Who Owns The Internet?”