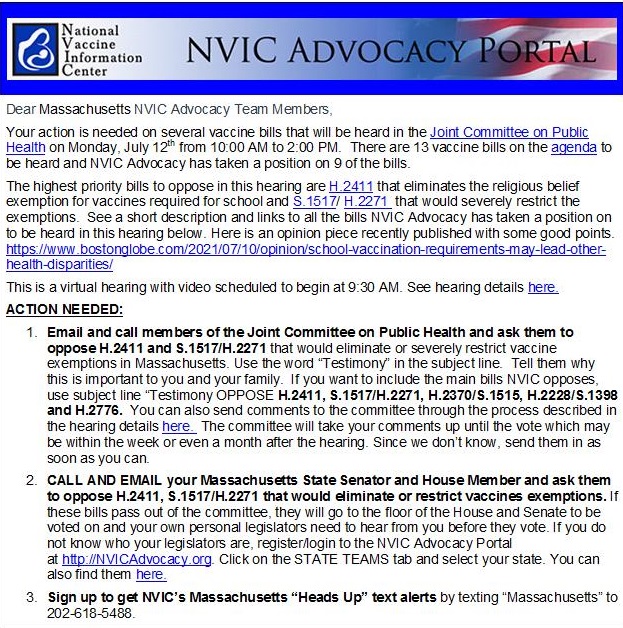 I received this email from this group with which I had registered when I lived in Massachusetts.  I had tried offering my services to another group and had gotten nowhere.

I was still learning—feeling my way around—but what I was feeling was disturbing.  I could not put my finger on it for a few years.  Then it hit me:

The Best Way to Produce the Desired Result…

These groups collected donations from the desperate and produced little in the way of results—an increase rather than a decrease—in the number of vaccines.

Since they were able to facilitate the passage of…

H.R.5546 National Childhood Vaccine Injury Act of 1986 is not Broken; It never worked—Repeal it!

an Act indemnifying the pharmaceutical industry of all civil liability for damages and deaths;

all they have done is explode the vaccination schedule by ignoring the past works of valuable people.

They seem to tout their own, recent accomplishments over more seasoned and knowledgeable personages.

I journeyed to Washington, D.C. and saw their leader at the VIE Event in November of 2019.

Is the Childhood Vaccine Schedule Safe?

I was made to feel welcome—but still—something did not feel quite right.  I felt very uneasy.  It wasn’t until a few weeks after I arrived home that I understood why.

A while after going home, I had offered my services to a Massachusetts group heavily entrenched in the network to which NVIC appeared to belong.  I was met with same disdain and near disgust that I had experienced from MDs when I rejected any of their pharmaceutical products—including the shots.

“I have had a number of experiences and interactions with affiliated people which were confusing—at first.

And I had attended local meetings [which I am certain was not appreciated] and had interesting interactions.  Below is one:

“They exert an enormous amount of control.  Health Choice [an RFK organization that has been instrumental in destroying medical exemptions across the USA] is notorious for keeping people in line. HC members are like little automatons, not unlike all the vaccine-hypnotized.

One meeting, a representative from their Connecticut arm told us she was the Federal liaison and had arranged luncheons for Offitt and crew [out of donated monies, I suspect], and was describing how cute his interactions were between him and a colleague.  This is a psychological manipulation called “humanizing,” which made Offit look like a man—not the monster that he is.

Perhaps if you met those arms of RFK organizations you could see the enormous harms they are doing.

And its members work hard to get people stuck on the fly-paper of their ideology—It’s very, very weird.  I don’t know if you’ve ever gotten that sense of being pursued to the extent that people want to shut you up, but I certainly have.

These are dangerously seductive groups that should be ignored out of existence.

At that meeting, when I pushed my belief that HR 5546 had to be repealed, that Federal liaison whiningly told me that would penalize all the plaintiffs currently having their cases reviewed.  Poor them had sometimes waited for years to get there and were years into their cases.

I assessed that statement over the course of several hours and realized that while we waited for the forever-stream of plaintiffs to get their cases through vaccine court, hundreds of thousands, perhaps millions of additional victims [babies, children, adults] would be added to the slaughter.  This woman was trying to push my guilt button and shut down my thoughts on the matter.

When that Connecticut Federal liaison took the stage [she was sitting in a chair] to tout a speech she was to make which had been written by RFK’s CHD’s lawyers, I got up and left.   The room went silent because it was a particularly bad day for me and I practically crawled out of the room.

I am quite visibly crippled by these things they are trying to save.”

And to even suggest we can rely on any governmental agencies to care about any of our babies or persons is ludicrous at best.  This was a rebuttal to an article that suggested we could:

I Saw a Headline Suggesting People Do Not Trust the COVID Shot because They Don’t Trust Regulators. Nothing is further from the Truth!!!

That Massachusetts group [for all intents and purposes] traded away our Medical Exemptions [MEs] for Religious Exemptions [REs].  Anybody trying to advocate for themselves was essentially squeezed out by this group.  I know because I was at the State House that day.

MEs are now under the auspices of the DPH which is controlled by the pharmaceutical industry.  I tried to get an ME and was unable to do so.  When I told the Snake Oil Peddler [er—MD] I had autoimmune disease and could not have any pharmaceutical products, she pasted on a Barbie Doll smile and said,

I stopped going to MDs and wrote this:

It was over a year  before I could write anything at all about the time I spent at the VIE Event in Washinton DC, but I finally wrote about my experiences at the event in this article:

Transhuman 101 Moderna Declares COVID Vaccine To Be An Operating System—Response by Joyce Bowen [Why we’re in this mess in the first place.]

And the results that have occurred since the VIE Event took place in Washington, D.C in November, 2019?  The CDC added more shots to the vaccination schedule.  Good Job, NVIC!!.

Here is a compilation of people and others talking about vaccinations.  Barbara Loe Fisher is even in some.

I am nearly 70-years-old.  My babies, my body, and our lives were destroyed by these shots.  I am not some little uneducated mother looking for someone or something to blame.  I declined a free pass to medical school in 1976 to care for my brain-damaged toddler.

The records below were recorded when I was 2 months past my 13th birthday:

I have taken to dedicating my articles to my sons.