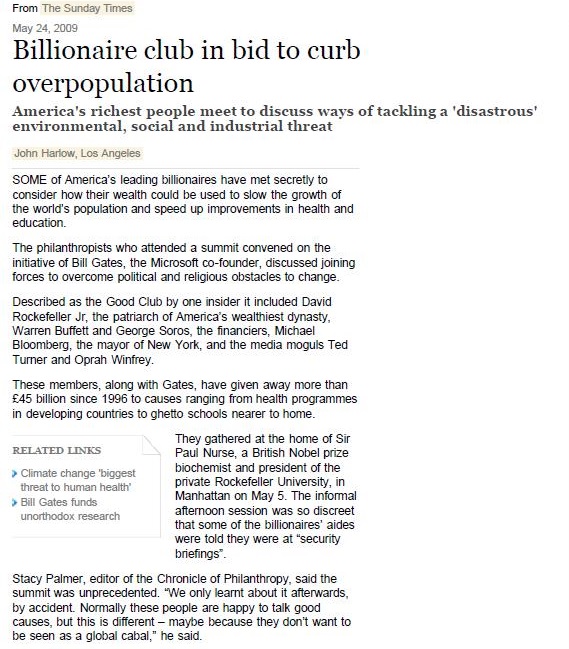 From The Sunday Times

SOME of America’s leading billionaires have met secretly to consider how their wealth could be used to slow the growth of the world’s population and speed up improvements in health and education.

The philanthropists who attended a summit convened on the initiative of Bill Gates, the Microsoft co-founder, discussed joining forces to overcome political and religious obstacles to change.

Described as the Good Club by one insider it included David Rockefeller Jr, the patriarch of America’s wealthiest dynasty, Warren Buffett and George Soros, the financiers, Michael Bloomberg, the mayor of New York, and the media moguls Ted Turner and Oprah Winfrey.

These members, along with Gates, have given away more than £45 billion since 1996 to causes ranging from health programmes in developing countries to ghetto schools nearer to home.

They gathered at the home of Sir Paul Nurse, a British Nobel prize biochemist and president of the private Rockefeller University, in Manhattan on May 5. The informal afternoon session was so discreet that some of the billionaires’ aides were told they were at “security briefings”.

Stacy Palmer, editor of the Chronicle of Philanthropy, said the summit was unprecedented. “We only learnt about it afterwards, by accident. Normally these people are happy to talk good causes, but this is different – maybe because they don’t want to be seen as a global cabal,” he said.

Some details were emerging this weekend, however. The billionaires were each given 15 minutes to present their favourite cause. Over dinner they discussed how they might settle on an “umbrella cause” that could harness their interests.

The issues debated included reforming the supervision of overseas aid spending to setting up rural schools and water systems in developing countries. Taking their cue from Gates they agreed that

overpopulation was a priority.

This could result in a challenge to some Third World politicians who believe contraception and female education weaken traditional values.  Gates, 53, who is giving away most of his fortune, argued that healthier families, freed from malaria and extreme poverty, would change their habits and have fewer children within half a generation.

At a conference in Long Beach, California, last February, he had made similar points. “Official projections say the world’s population will peak at 9.3 billion [up from 6.6 billion today] but with charitable initiatives, such as better reproductive healthcare, we think we can cap that at 8.3 billion,” Gates said then.

Patricia Stonesifer, former chief executive of the Bill and Melinda Gates Foundation, which gives more than £2 billion a year to good causes, attended the Rockefeller summit. She said the billionaires met to “discuss how to increase giving” and they intended to “continue the dialogue” over the next few months.

Another guest said there was “nothing as crude as a vote” but a consensus emerged that they would back a strategy in which population growth would be tackled as a potentially disastrous environmental, social and industrial threat.

“This is something so nightmarish that everyone in this group agreed it needs big-brain answers,” said the guest. “They need to be independent of government agencies, which are unable to head off the disaster we all see looming.” Why all the secrecy? “They wanted to speak rich to rich without worrying anything they said would end up in the newspapers, painting them as an alternative world government,” he said.

So what was Gates’ next move?

Bill Gates, the Microsoft founder and philanthropist, will donate $10 billion (£6 billion) over the next decade to develop and deliver new vaccines to children in the developing world in one of the biggest ever single charitable donations.

Bill Gates, the Microsoft founder and philanthropist, will donate $10 billion(£6 billion) over the next decade to develop and deliver new vaccines to children in the developing world in one of the biggest ever single charitable donations.29 January 2010 • 10:55pm

Speaking at the World Economic Forum in Davos, Mr Gates called for a “decade of vaccines” to reduce child mortality dramatically by 2020. By the end of the decade, 90 per cent of children in the world’s poorest nations would be immunised against dangerous diseases such as diarrhoea and pneumonia, he said, saving some eight million lives.

“We must make this the decade of vaccines,” Mr Gates said in a statement.  “Vaccines already save and improve millions of lives in developing countries. Innovation will make it possible to save more children than ever before.”

Mr Gates said the commitment more than doubles the $4.5 billion the Bill and Melinda Gates Foundation has given to vaccine research over the years.

The foundation said up to 7.6 million children under 5 could be saved through 2019 as a result of the donation. It also estimated that an additional 1.1 million youngsters would be saved if a malaria vaccine can be introduced by 2014. A tuberculosis vaccine would prevent even more deaths.

“Vaccines are a miracle,” said Mrs Gates. “With just a few doses, they can prevent deadly diseases for a lifetime.”

Margaret Chan, head of the World Health Organisation, called the Gates contribution unprecedented and urged governments and private donors to add to the initiative.

“An additional two million deaths in children under five years could be prevented by 2015 through widespread use of new vaccines and a 10 percent increase in global vaccination coverage,” she said.

The Gates statement said the foundation would help to dramatically reduce child mortality in the next 10 years and urged others to pitch in with research funding and other financial support for poor children.

Mr Gates noted the announcement comes on the 10th anniversary of the foundation’s partner GAVI Alliance, which he praised for its work in immunising children against killer diseases.

The biggest charitable donation in history was from Warren Buffet, the investor who was at the time the world’s second-wealthiest man, after Mr Gates. Mr Buffett gave $31 billion to The Gates Foundation in 2006 tosupport its work in the developing world.

It is with a horribly heavy heart to say Bill Gates and friends have succeeded with their genocidal aspirations.  We have lost our greatest legacy—our children.

The more of us who do this, the more they can’t ignore us.

2 thoughts on “Billionaire club in bid to curb overpopulation May 24, 2009  The Sunday Times Updated”